One of the design requirements for the Machine Interface (MI) Driver was to make it straightforward to add a new command class to the code base, while minimising interference with other code. This blog post explains how to do that; first giving some background into how and why the command system is set up as it is, then showing how to implement a command and get it operating. Following that is a description of how to get a command to parse its arguments and retrieve the values. Finally, section 4 shows examples of the different types of MI command arguments and how they are handled, and section 5 describes what to do should a command fail. If you are reading this for the first time, it is recommended to read all of the sub-sections in the order shown.

I recommend that you read Part 3 of the MI Driver blog, "The Design", as it gives a high level overview of the driver, and how an MI command is handled.

This blog assumes that you have already downloaded the MI Driver code and build files from the LLDB repository and can successfully build and run the MI Driver. The application of a command described here is based on version 1.0.0.6/7, but it is envisaged that the instructions given should cover future versions with little or few changes.

Figure 1 shows a UML diagram of the command class and its association with other parts of the MI Driver. 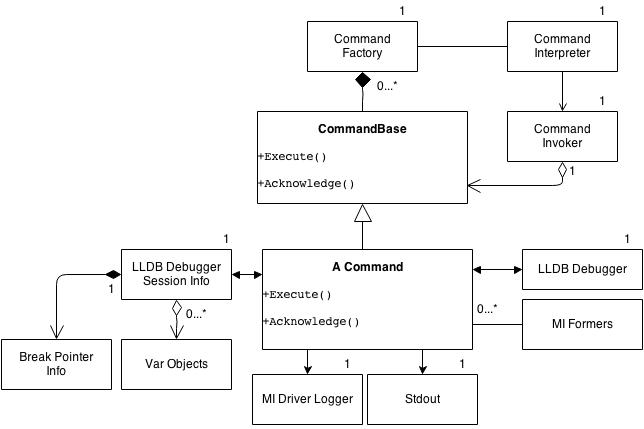 Your command is very likely to have to work with some parts shown in the diagram, though it does not have to. The simplest command is a class derived from CMICmdBase, overriding the Execute() and Acknowledge() functions, which does nothing in the Execute function and outputs “Done” in the Acknowledge function:

This will form the MI response:

The components (as shown in Figure 1) that your command's code may have direct interaction with are:

The other components shown in the diagram are for reference only, as your command's code will not need direct contact with those parts.

Generally, the rule for implementing a command is that work is only carried out in the Execute() function, and results of that work are turned into an MI response only in the Acknowledge() function. While this is not strictly required, other than for consistency, it does allow scope for future development, should it arise.

The steps below create and implement a simple command like the one above:

Argument definitions can also be set so that they output a warning (to the Log file) when they receive arguments or options that are recognized but not handled by the command (see the CMICmdArgValXXX's constructors). This allows you to track an incoming MI command that has options which you really should handle but are currently ignoring. If you have not set up a command to accept an option that it should handle, it will not be recognized during parsing, triggering a failure report to the effect that an unrecognized option was specified. Using the CMICmdArgXXX set of classes disallows a command from ignoring arguments or options.

The MI specification indicates that there are about 10 types of command arguments or options that can be handled. The CMICmdArgXXX set of classes can handle the following types of input:

The CMICmdArgValXXX set of classes are:

The CMICmdArgSet class carries out the parsing of the MI command's options that are held in a CMICmdArgContext object.

The code below shows the command overriding and implementing the ParseArgs() function.

Using the class CMICmdArgSet, an aggregate of the command, a string argument is being added to the list of arguments that this command will look for (in this case there is only one argument). The CMICmdArgValString constructor defines whether the argument is mandatory and is handled by the command. In the case that an unhandled optional argument was present, a warning would be generated.

Many of the CMICmdArgValXXX classes have different constructors that tell the object and the validation process how to parse and validate a particular argument. Once all the arguments or options are defined, the command then parses and validates the command's options text. The code below shows an example of extracting the value of an argument found in the command options text, and using it to ask whether the MI command is implemented.

The first line in the function is a preprocessor macro that hides error handling code for the case where an argument name is used that is not recognized by the CMICmdValSet object. The second line shows the command retrieving the value for the argument named 'CmdName'.

If the MI command under query has been found in the Command Factory, the command's Acknowledge() function creates the MI response:

Using another example, the command -file-exec-and-symbols takes a file path as an argument. The code below shows the code implemented in the MI Driver to look for this type of argument. If the argument did not look like a file path, an error would be returned to the Command Invoker.

The MI command sent to the CMICmdFileExecAndSymbols command looks like:

The Execute() code is:

The MI command sent to the CMICmdThreadInfo command looks like:

As described in the MI specification, the square brackets ('[]') indicate that the argument is optional and is numerical. The second parameter in the CMICmdArgValNumber constructor is a bool, which is set to true if the argument is mandatory or false if it's optional.

The MI command sent to the CMICmdExecNext command looks like:

Note that the MI specification declares that, for this command, the long option accepts only one numerical value. This will be specified in the argument definition.

The MI command sent to the CMICmdVarEvaluateExpression command looks like:

Here we have an optional argument preceded by a mandatory argument. The argument definitions are searched for in the order that the definitions were added to the CMICmdArgSet object.

The above code is an example only.

A thread group argument has a value that looks like “i2”. The MI command sent to the CMICmdListThreadGroups command looks like:

Here we have an optional argument 'group' that takes an arbitrary list of numbers, followed by the thread group.

Because the command is only handling the thread group argument, the other arguments are not retrieved in the Execute() function.

4.7 A Command That Parses Many Arguments

The MI command sent to the CMICmdBreakInsert command looks like:

4.8 A Command with an Arbitrary Number of Arguments

The MI command sent to the CMICmdBreakCondition command looks like:

This command looks simple enough, but is complicated by the fact that the 'expr' argument can be a single word, a list of words, or words surrounded by a set of quotes. For example:

We know that there must be at least one word present, otherwise the argument parsing would report an error. So, CMICmdValArgString is used and set to mandatory. The argument can be formed of a set of words surrounded by quotes, so the CMICmdValArgString is also set with 'handle quotes'. However, the expression argument can also be given to the command as a set of words not surrounded by quotes. This means that we have to handle a List of N arguments of type String as well. To deal with this, we define both a mandatory string argument and also an optional List of N strings. Though the definition list below initially seems to handle additional arguments, the final two definitions work together to handle an unquoted set of words.

As we can see above, the expression string m_strBrkPtExpr is made up of the mandatory part and any additional words added on.

All of the examples so far have shown us only how to retrieve a single value for a given argument or option. However, there are also cases where we need to retrieve a list of values for a given argument. The argument definition List of N type above is such a case. The code below shows the GetRestOfExpressionNotSurroundedInQuotes() function that is called in the code above.

The code above is the most explicit way to retrieve a list's values. The list type classes provide helper functions to simplify your code without the need to use the command base class function GetOption(). Some example helper functions are:

These functions are commonly used in various commands.

As you may have noticed from earlier examples, a command can fail by returning MIstatus::failure. This can be returned from the functions ParseArgs(), Execute() and Acknowledge(). Should a command return failure, the Command Invoker will try to retrieve an error status description message from that command and send it on to the stderr stream or Log file. It is important for all commands to set an error message upon failure.

An example of a command setting an error message is shown below.

Note that there is a distinction between a command failing due to incorrect arguments or errors in its own implementation, and a command working as expected but with its task returning a negative result. In the latter case, the command should not return a failure status.

Also note that the error descriptions are not hard-coded strings, but use the CMICmnResources Package to retrieve a string with a specified resource ID. This is because all text in the MI Driver that is seen by the end user is held in the Resources Package. In the future, should the messages require localisation, this can be handled by the Resources Package without the need to change the code in the commands.

This blog post has concluded the series on the MI Driver, covering the implementation of commands. The reader should now be able to add simple commands of their own if necessary. Thanks for reading, and we hope that you found the series useful! If you have any comments, please feel free to use the comment thread below. We'd love to hear about your experiences with the MI Driver!